While We’re On the Subject of Racist Images…

by Dave Kenney posted on July 20, 2020 in Advertising, Business, Race 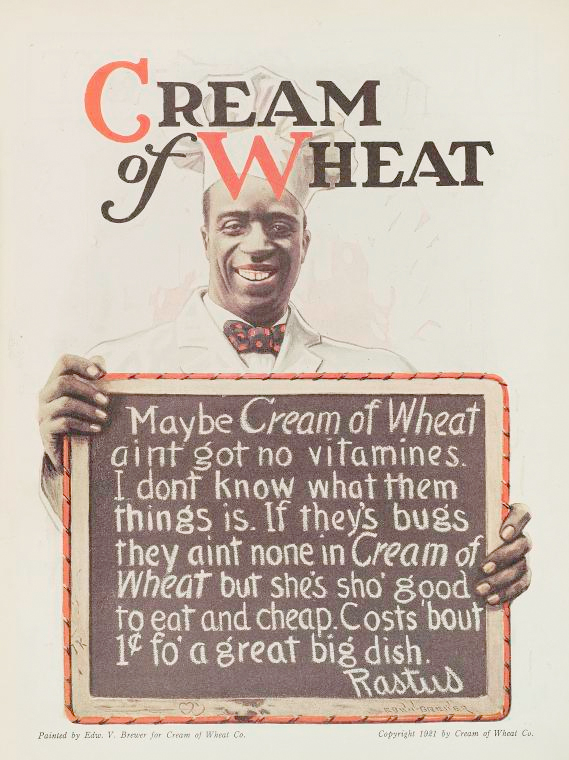 It’s probably time to consider the mysterious longevity of this Minnesota-born corporate symbol.

Quaker Oats’ recent decision to abandon its Aunt Jemima brand and acknowledge its origin as a racial stereotype got me thinking about another well-known corporate mascot—and the concept of complicity.

For more than a century, the breakfast cereal Cream of Wheat (manufactured for many years in Minneapolis) has featured a fictional African American chef named Rastus on its packaging and in its advertisements. Like Aunt Jemima and Uncle Ben, Rastus has, since his birth in Minnesota, reflected and reinforced white stereotypes, rooted in slavery, of happy and docile black servitude. Confronted periodically by critics, Cream of Wheat’s corporate overseers have defended Rastus’s marketing endurance by touting his high recognition among generations of consumers. The product’s current owner, B&G Foods, has yet to encounter any intense pressure to retire Rastus, but that could easily change now that Aunt Jemima is leaving. But even if B&G ultimately accepts responsibility for perpetuating such a long-running racial stereotype, we shouldn’t forget that Cream of Wheat’s various owners are not the only ones who have made it possible for such a problematic brand to persist.

What about the ad agencies that, over the years, accepted and developed Cream of Wheat founder Emery Mapes’s vision of an African American chef mascot? Two firms—the J. Walter Thompson Advertising Company of New York and the Mac Martin Advertising Agency of Minneapolis—were most responsible for turning Rastus into a marketing phenomenon during the early 1900s. They eschewed what were called “reason-why” campaigns (those touting health benefits, for example) in favor the kind of pure emotion that they felt Rastus conveyed. And their unconventional marketing approach was widely admired within the advertising industry. A 1917 article in the trade publication Printers’ Ink—written in jarringly racist language— described the Rastus ads as, “delightfully tender and human reflections of real life.” Today we recognize them instead as gauzy representations of a servile black man doing the bidding of white children and adults.

What about the artists who used a photograph of a real person—an African American lunch counter attendant from Chicago—as the inspiration for dozens of Cream of Wheat paintings? Several famous American illustrators, including James Montgomery Flagg, created versions of Rastus, but none was as prolific as Minneapolis artist Edward Brewer, who painted his first one in 1911. Whatever misgivings Brewer and his fellow illustrators had about using a real-life black subject to sell breakfast cereal were apparently easily outweighed by the $500 commission each painting generated. The character they created still smiles out from boxes of Cream of Wheat today.

What about the journalists and historians who, in the past, wrote glowingly about the endurance of the Cream of Wheat brand without acknowledging the damaging stereotype it propagated? An admiring 1980 profile of Edward Brewer in the Minnesota Historical Society’s journal, Minnesota History, featured multiple reproductions of Brewer’s Rastus paintings without once mentioning their racial component. Such an omission would probably never make it past an editor today, but anyone who writes about history—myself included—knows how easily unexamined prejudices can make their way into copy. We need to acknowledge that our choices as writers and historians sometimes add to the problem.

And finally, what about those of us who actually like Cream of Wheat, who have happily purchased and eaten it without ever really thinking about the face on the box and what it represents. Perhaps we can forgive ourselves for not knowing the truth about Rastus’s origins, for not knowing that his creator, Emery Mapes, joked he could sell sawdust if his “n____s”—meaning dark-skinned mascots like Rastus—led the marketing campaign. But we could easily have figured it out if we had chosen to. The question is: If we had known, would it have mattered? Would it have convinced us to stop buying Cream of Wheat or demand Rastus’s removal? Consider me skeptical.

It’s easy to dismiss such questions as a distractions. (Does anybody even eat Cream of Wheat anymore?) But Rastus and Aunt Jemima and Uncle Ben are, for all their marketing stamina, cultural relics. Whatever fondness we might have for them, whatever value they might have as brands, they’re not worth the trouble anymore. It’s time for Minnesota-born Rastus to take off his chef’s hat and retire.