The Roots of Vaccine Skepticism

by Dave Kenney posted on January 04, 2021 in Public Health, Race 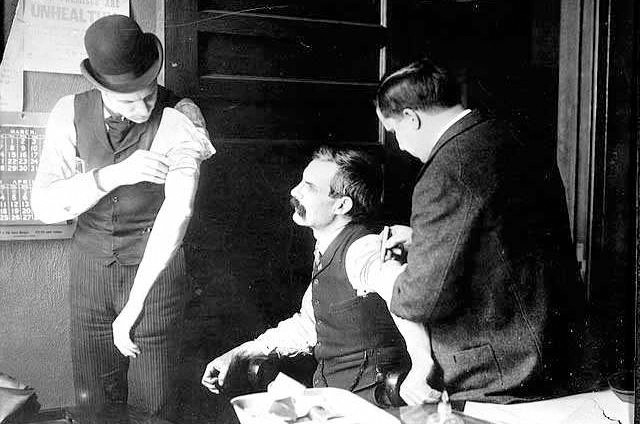 Smallpox vaccinations in Minneapolis, 1904. Via the Minnesota Historical Society

Some reluctance is historically understandable, even if it’s currently misguided.

One day in early 1901, a Minneapolis health inspector named Luxton visited the city workhouse to administer smallpox vaccine to all inmates who had not previously been vaccinated. Deadly smallpox was spreading rapidly across the nation, and had recently taken hold in Minnesota. The race was on to prevent the epidemic from getting out of hand. Public health officials in the state had no legal authority to force vaccinations on those who objected, but that didn’t stop them from occasionally wielding what were supposed to be prohibited powers against the powerless. The inmates at the workhouse fell into the powerless category.

While most of the men Luxton encountered that day submitted, one did not. “A muscular fellow with a determined look in his eye” declared that he was not about to let the vaccinator touch his arm. Luxton offered to administer the vaccine to the man’s leg instead. The man agreed. But it turned out the man was a trickster. He had a wooden leg. He insisted that Luxton do as promised, and perform the vaccination on the artificial limb. Luxton was not amused. He called in a couple jailkeepers and had them strip down the man and subdue him while vaccine was administered against his will. The story, which ran in the Minneapolis Tribune, served the health department’s purpose. It reassured readers that the city would do whatever it took to protect good people from the less good—those on the margins—who, by implication, could not be trusted to do the right thing.

It’s one of many such stories from our past that help explain why some people might be reluctant to get vaccinated against COVID-19.

A recent study conducted by the Pew Research Center shows that only 42 percent of African American adults plan to get the coronavirus vaccine. That compares with 60 percent of Americans overall who are inclined to do so. Black people have plenty of reasons to be skeptical about the government’s public health intentions. Many are well aware of the Tuskegee syphilis study and other racial outrages perpetrated over the years in the name of medical advancement. And they are not alone. Other Americans marginalized due to race, ethnicity, and economic circumstances have reason to be wary as well. The forced vaccination of the man with the wooden leg is just one example from Minnesota’s early 1900s smallpox epidemic of how social inequities can taint efforts to protect public health.

The homeless and transient—those described by one St. Paul health official as belonging to the “lower world”—were among the first be singled out for coerced vaccination. Raids on Twin Cities lodging houses, dingy buildings packed with low-wage working men, became increasingly common. When a smallpox case was discovered at lodging house on South Washington Avenue in Minneapolis, a phalanx of city health workers moved in and “thoroughly fumigated and vaccinated” all lodgers, while police guarded the doors “to prevent exit or egress.” In this and other similar cases, health authorities got around restrictions on forced vaccination by threatening forced quarantines.

Recent immigrants were also subjected to early and uncompromising vaccination. In early 1901, the neighborhood known as Little Italy on St. Paul’s upper levee found itself under a “state of siege” when a child there was diagnosed with the most virulent strain of smallpox. In explaining the need to strictly enforce vaccination in the community, the St. Paul Globe explained that the residents of Little Italy were “clannish” and “little given to the most ordinary rules of cleanliness.”

Communities of color were likewise targeted with heavy-handed treatment during the epidemic. In northern Minnesota, federal authorities threatened to withhold treaty payments to members of the White Earth Nation of Ojibwe if they did not get vaccinated. In Minneapolis, health officials raided an African American social club on Hennepin Avenue and prevented all members from leaving until they submitted to vaccination. These were not isolated incidents. Although authorities in Minneapolis acknowledged that smallpox made no distinction between toney Lowry Hill and downtrodden Bohemian Flats, they insisted it made sense to focus their attention on “poorer quarters” where the disease was most likely to spread. Such explanations provided little comfort to those who felt besieged by both disease and unequal treatment by the government.

This is not to say the inequities that surfaced during Minnesota’s mostly-forgotten turn-of-the-century smallpox epidemic can explain away the wariness that some people now have about the COVID-19 vaccine. Too many things have changed since the early 1900s to draw clear parallels. For one thing, there was no formal process to ensure the safety and efficacy of vaccines back then. Now there is. Beyond that, we have little reason to suspect that our current local, state, or federal authorities will stoop to forcing or coercing or anyone to take the coronavirus vaccine against their will. But public health missteps, no matter how infrequent or dated, add up in the collective memory. We should keep that in mind. It’s no surprise that some people think twice before saying yes to the latest vaccine.