The Killing of Tim Graham 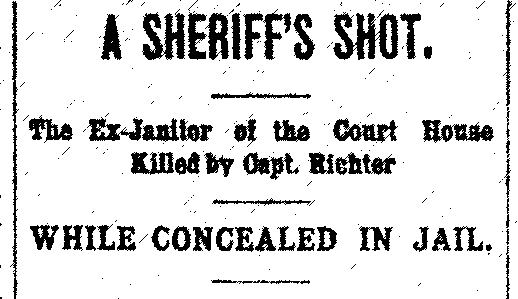 In the wake of George Floyd’s murder, I went looking for the earliest case of an officer killing a Black person in Minnesota. This is what I found.

Distrust, fear, and loathing of law enforcement has permeated African American communities in the Twin Cities—with good reason—since long before the killing of George Floyd by Minneapolis police. But even those most familiar with local law enforcement’s well-documented record of violence against Black, Native, and other marginalized communities may not realize just how far back those sentiments reach. Although it’s impossible to say with any certainty, evidence suggests that the relationship between Black people and law enforcement began seriously deteriorating in the Twin Cities in the late 1880s, when an African-American man was shot to death by a cop. It may well have been the first case of a law enforcement officer killing a Black Minnesotan—and it’s remained largely forgotten.

On the evening of September 27, 1887, Ramsey County Sheriff Fred Richter shot and killed Tim Graham in the basement of the county jail in downtown St. Paul. Graham was 35 years old, married, and had worked until recently as the jail’s janitor. He had spent at least part of the evening he died drinking beer and playing cards in a nearby saloon. After leaving the bar, he had returned to his former place of employment and somehow gotten inside. It was there, in the jail’s basement, that he had his deadly encounter with Richter.

As the sheriff would later testify, he didn’t realize at the time that the man he discovered in the basement was Graham. He insisted he thought Graham was an inmate trying to escape:

I commanded him to him to come out and show himself. He made no effort to do so at first, and I pulled aside some of the clothing in order to obtain a look at his face. Just as I did so, the fellow bumped up against me, still endeavoring to screen his face, and pushed on out into the hallway leading to the street door. He did not heed my command to halt, but persisted in trying to reach the front door, as I supposed, whereupon I fired, and there is the result.

Most local newspapers readily accepted Richter’s version of events. They also played up circumstances that reflected poorly on Graham—especially his alleged fondness for liquor. The St. Paul Globe reported that “a telltale flask in the right pocket of [Graham’s] sack coat showed that he had stimulated himself for the accomplishment of some purpose, probably murder.” But St. Paul’s most influential African American newspaper, the Appeal, hinted that other, more nefarious motives on the sheriff’s part, were at play. “There is something beneath the surface that has not been brought to light,” the newspaper’s editor, John Quincy Adams, wrote, “and therefore a full investigation of the affair should be had.”

A coroner’s jury met two days after the killing to examine its circumstances, but the outcome was never really in doubt. Five of the six jurors were white. The jury’s sixth member—African American businessman Thomas Lyles—was the only one who seemed interested in pursuing the case further. After an hour and a half of deliberations, the jury ruled 5-to-1 that Richter was justified in killing Graham. Lyles was the sole dissenter.

For many Black Twin Citians, the jury’s decision confirmed what they had always suspected—that justice was anything but colorblind in Minnesota. “Nothing that has transpired in this city since our advent seems to have so aroused the Colored citizens as the killing of Tim Graham by Sheriff Richter,” the Appeal declared. “The sentiment among them is almost unanimous, that the killing was unjustifiable, the verdict of the majority of the coroner’s jury to the contrary notwithstanding.” Compounding the injustice, the Appeal lamented, was the fact that outrage at the verdict was shared “by a large number of whites who are not so hide bound and affected with color prejudice, that they cannot render a just opinion where the two races are concerned.”

On the evening after the jury’s decision was announced, Thomas Lyles and Rev. William Gray of Pilgrim Baptist Church called a community meeting to discuss possible responses. About three dozen people showed up. The participants discussed ways to bring the case before a grand jury, but they knew chances of a reversal were slim. If anyone advocated a public protest, the suggestion was not recorded. With so few options for justice available, the Appeal expressed the helplessness that many of its readers felt. “We have come to the conclusion,” John Quincy Adams wrote, “that that because a county officer, a white man, has killed only a Negro, nothing [can] be done about the matter,”

A week later, a grand jury affirmed the decision of the coroner’s panel and cleared Richter.

“And that settles it,” the Appeal concluded.

From our vantage today, with outrage over the death of George Floyd spreading across the globe from Minneapolis, it’s hard to imagine how another killing at the hands of law enforcement, 133 years ago, failed to generate more than a few days’ headlines. But 1887 was a different time. With the previous census showing fewer than 500 Black residents in both St. Paul and Minneapolis, the Twin Cities African American community did not possess the sheer numbers or political clout needed to effect major change. And despite the Appeal’s assertion of substantial support among white Minnesotans, there was little evidence to suggest that any of them were willing wage a fight for racial justice in the name of Tim Graham or any other Black victim. Those were the realities that Black Twin Citians had to cope with in 1887. And while succeeding generations have despaired that the outrages perpetrated by our criminal justice system continued as decades passed, we can at least hope that the energy evident in today’s protests will bring the kind of justice that Tim Graham was denied.