Stories of Resilience from Disasters Past

by Dave Kenney posted on July 31, 2020 in Disasters, Personal History 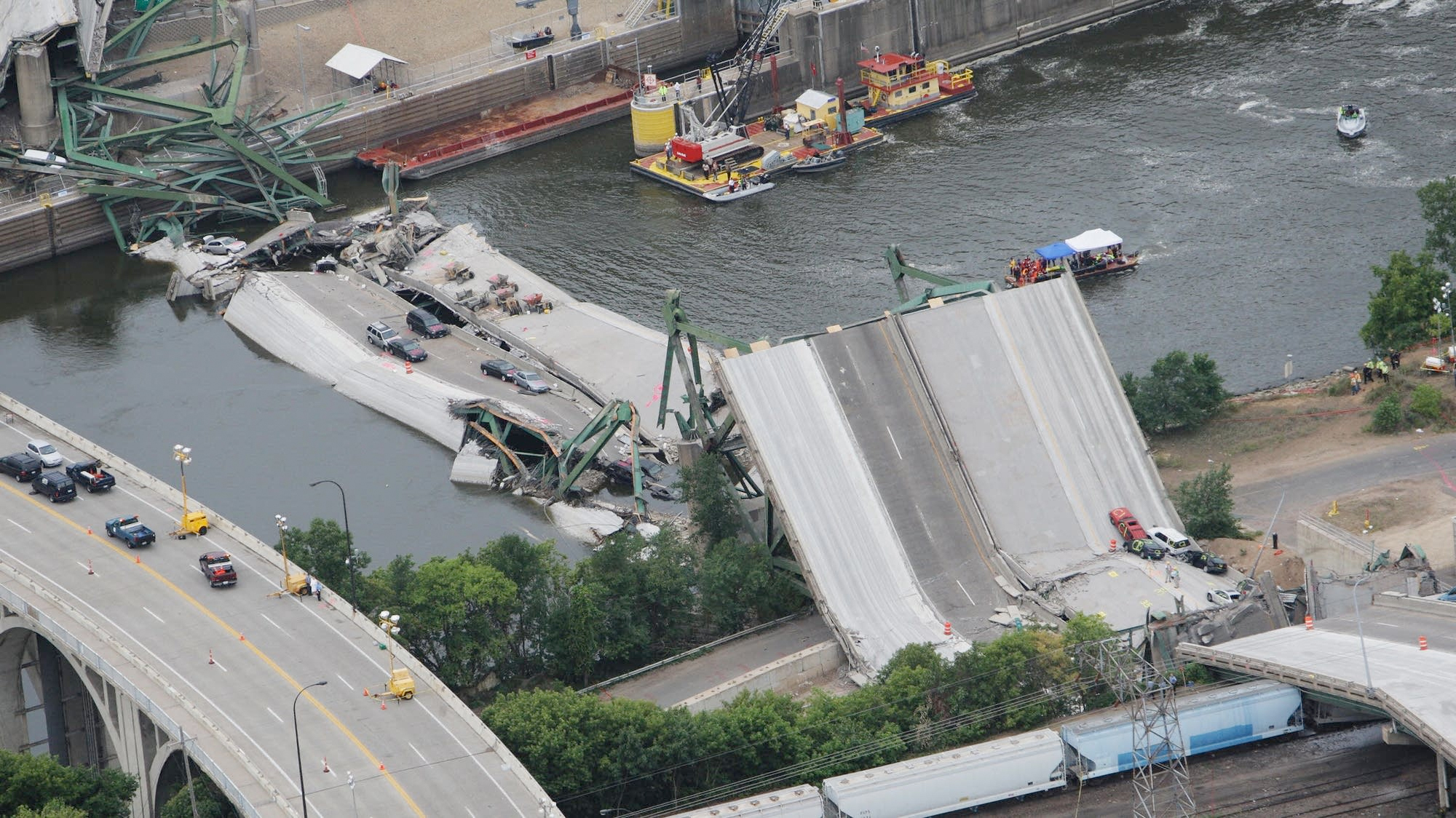 Thirteen years ago, I took my daughter to see the collapsed I-35W bridge.

My eleven-year-old daughter, Grace, wanted to see the fallen bridge. When I asked her why, she told me that the calamity just “didn’t seem real.” The pictures on television and in the newspaper were unfathomable, insufficient. I understood. We drove down to Minneapolis together. I knew exactly where I wanted to take her.

We parked on South Second Street and walked toward the river, skirting the Guthrie, and onto the timber footpath of West River Parkway. A half block down, we veered onto a scrubby patch of grass and came to a stop. In front of us the Stone Arch Bridge swept across the Mississippi. To our right, in the distance, the crumpled, greenish remains of the 35W bridge slouched into the river’s north bank. It was a soggy afternoon. We stood wordless, under umbrellas, looking. After a minute or so, I broke the silence. “Come over here,” I said. “I want to show you something.”

We walked across the parkway to the arched rear entrance of the Mill City Museum. I pointed to an old marble slab, embedded in the stone wall above our heads. It was engraved with words, some nearly obliterated by time and the elements. It told the story of another disaster—the explosion and fire that destroyed the great flourmill known as Washburn “A” on May 2, 1878. “Not one stone was left upon another,” it explained, “and every person engaged in the mill instantly lost his life.” It ended with a list of the fourteen “A” Mill employees who died that day:

This was why, among all the places I could have brought my daughter, I brought her to this place. I knew that the fading, marble memorial was here, and I found it comforting. Eighteen people, including the fourteen “A” Mill employees, had died in what was then the worst disaster in Minneapolis’ short history. Several other buildings had been destroyed. The city had lost about a third of its milling capacity. Today, nearly 130 years later, most of the victims’ names can still be remembered and honored within sight of the collapsed 35W bridge. The names are hard to read, but they manage to stave off the troubling tendency to forget.

They also serve as a reminder of the city’s resilience. Within hours of the “A” Mill’s destruction, its owner, Cadwallader C. Washburn, declared that he would rebuild “without delay” and that his new mill would be bigger and better than the old one. Two months later, all the rubble was removed and reconstruction was set to begin. The new “A” Mill opened the following year. “The great explosion, although a terrible catastrophe, in no way disheartened or discouraged the capitalists and business men of the city,” the Minneapolis Tribune reported, “and they have shown an abiding faith in the future greatness of the metropolis and manufacturing center of the Northwest.”

I’m not sure I properly conveyed to Grace the connections I saw between the calamities of 1878 and 2007. She was most taken with the rough coincidence of the numbers: fourteen people killed in the “A” Mill; thirteen killed in the bridge collapse. But at least now she has a better understanding of how the people of Minneapolis—like most people in most places—can rebound from disaster. Perhaps years from now she’ll be able to take a child or grandchild down to this same place by the river and read the names of the people who died when the bridge fell down—along with the fourteen names on that old slab of marble.