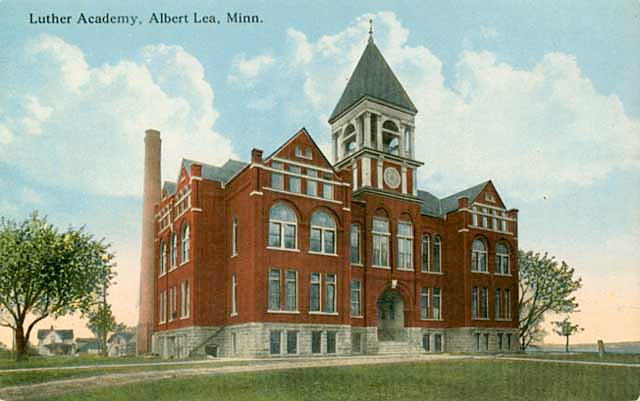 On the Monday before Thanksgiving 1918, business leaders in Albert Lea, Minnesota, declared victory of sorts on the front pages of two local newspapers. “Good cheer is in order,” they proclaimed. “Smile and the world will smile with you.” Indeed, they and nearly everyone else in Albert Lea had legitimate reasons to give thanks. For one thing, the Great War in Europe had recently come to an end. But Albert Lea’s businessmen seemed especially giddy about something else: the apparent defeat of what had become known as the “Spanish flu.” Over the previous two months, the influenza virus responsible for a global pandemic had sickened hundreds of people in the city and killed at least 14. But now the disease seemed to be retreating, and the businessmen were in the mood to celebrate. “Life is coming back to what it used to be,” they asserted. “We shall soon forget there ever was an influenza epidemic. Why shouldn’t we? Restrictions that were placed upon communities several weeks ago have been removed. In other words: the ban has been lifted.”

But the people of Albert Lea, like people everywhere—in Minnesota, the United States, and the rest of the world—were soon to learn that there was no way to truly defeat a virus to which few people were immune and for which there was no vaccine. The “Spanish flu” ebbed and flowed, but it never really went away.

The pandemic’s first wave hit the United States in the spring of 1918, but it was mild, and pretty much skipped over Minnesota. The second wave arrived in September 1918, and it was that one that walloped Albert Lea and so many other communities in Minnesota and the rest of the United States. Municipalities responded by setting up emergency hospitals, quarantining households where the disease appeared, closing schools, shutting down certain businesses, and banning public gatherings. Citizens chafed at the restrictions, but they generally recognized the need for patience. After two weeks of restrictions in Albert Lea, the Freeborn Standard summed up the city’s glum mood. “Yesterday was probably the longest Sunday people here ever spent,” it lamented. “There was no church nor moving pictures to pass the time, and added to that it rained all day.” Still, the newspaper cautioned its readers that “every care must be exercised until the malady is entirely stamped out.” No wonder then that, a few weeks later, the city’s business leaders were eagerly declaring that the disease was vanquished.

But they were wrong. There were more waves to come.

The first sign that the influenza would persist came in mid-December, when an outbreak occurred at a local boarding school, Luther Academy. The city responded by briefly banning dances and imposing a few other restrictions, but the spike in cases was short-lived. The December uptick, which also occurred in other Minnesota cities including Minneapolis, turned out to be the last gasp of the “Spanish flu’s” second wave.

The pandemic’s third wave hit the United States in March and April of 1919, but Albert Lea, like most communities in Minnesota, avoided the worst of it.

It wasn’t until January of 1920—15 months after the “Spanish flu” first emerged in Albert Lea— that the city experienced the fourth wave. This final surge, which affected communities throughout the United States, is often forgotten today, but it serves as a grim reminder that viruses, with little to stop them, can reemerge at any time. In Albert Lea, the fourth wave turned out to be less deadly but at least as pervasive as the second wave of autumn 1918. Once again, the disease emerged at Luther Academy and quickly spread into the community. The city cancelled its winter sports carnival, banned public gatherings, and shut down all dance halls, movie theaters, lodges, schools, and houses of worship. It set up a new emergency hospital in a Masonic hall, which quickly became what the Albert Lea Tribune called “one of the busiest places in the city.” Although the fourth wave, which continued through most of February, apparently killed only a small number of people in Albert Lea, it still did considerable damage statewide. Statistics compiled by the state board of health shortly after fact showed that more than 2,100 Minnesotans died of influenza in January and February 1920, the two months that encompassed the fourth wave. Those numbers almost certainly represented an undercount.

As it turned out, the businessmen who predicted in the fall of 1918 that the people of Albert Lea would “soon forget there ever was an influenza epidemic” had engaged in wishful thinking. While life in the city did return to a certain level of normal once the “Spanish flu’s” second wave petered out, the deadly disease continued to lurk until it reemerged more than a year later.

Today, as Minnesota loosens restrictions imposed during a new pandemic, the century-old experience of Albert Lea—and the similar experiences of countless other communities in Minnesota and elsewhere—can instruct us. It’s natural to identify with those business leaders who in 1918 called on the people of Albert Lea, shell-shocked by the “Spanish flu,” to stop “moping around” and “look on the bright side life.” After all, we want to get on with our lives, too. But we, unlike those southern Minnesota optimists, also need to temper our expectations. The new coronavirus is not done with us, and probably won’t be for a long while. It may not be as deadly as H1N1 virus behind the “Spanish flu,” but it has a longer incubation period, which means it will probably burn through communities more slowly than the “Spanish flu” virus did. And once it completes its burns, it will almost certainly hang around until conditions are right for a resurgence. That’s how the influenza pandemic played out a century ago. We should be ready for the very real possibility that, at least in this respect, history will repeat itself.