by Dave Kenney posted on August 07, 2020 in Entertainment, Personal History 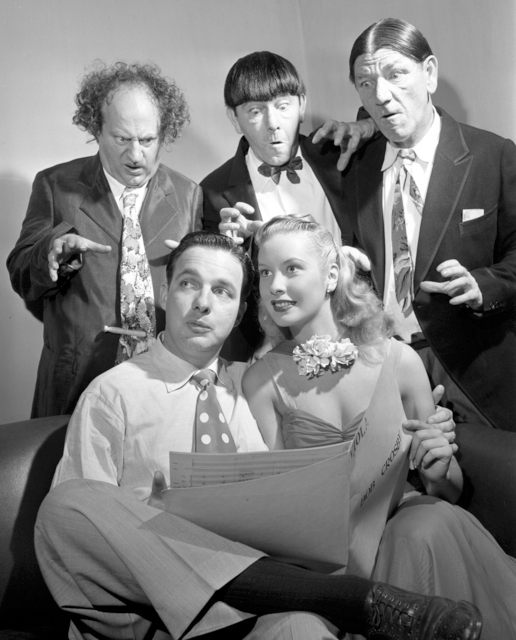 Every weird photo has a story behind it.

Originally published in the Summer 2015 edition of Minnesota History

I was never much of a fan of the Three Stooges and their eye-gouging brand of slapstick comedy. Growing up in the Twin Cities during the 1960s and 1970s, I much preferred the more controlled humor of the old Laurel and Hardy features I watched every Sunday morning on WCCO television. The Stooges were too unpredictable, too dangerous. I never understood them.

And now, as I consider this photograph, I realize I still don’t understand them.

The Three Stooges were past their prime by the time this publicity still was taken in late August 1949. The most popular Stooge, Curly Howard (the bald one), had suffered a debilitating stroke three years before and had been replaced by his brother, Shemp. Moe Howard, Shemp Howard, and Larry Fine were still making enjoyable two- reel shorts during the late 1940s, but they were no longer headliners. They had come to Minneapolis as part of an eclectic lineup of second-tier live performers playing the palatial Radio City Theatre.

Top billing on this weekend went to the seemingly oblivious gentleman in the photo’s foreground, the bandleader and radio personality Bob Crosby. Crosby, the youngest sibling of crooner Bing Crosby, served as the master of ceremonies of what the Radio City’s proprietors touted as a “Giant State Fair Week Stage- Screen Show!” During the stage portion of the two- hour extravaganza, Crosby and and fellow bandleader Ted Weems handled the music. Penny Edwards, the young starlet shown here nuzzling up to Crosby, danced. The Stooges provided comic relief. The screen offering—almost an afterthought—was Africa Screams, Abbott and Costello’s latest romp.

I wish I could tell you what kind of comic message Larry, Moe, and Shemp are trying to convey here. The scene probably came to be only after the photographer, sent to the Radio City by his bosses at the Minneapolis Star, asked the performers to strike a memorable pose. I like to think the Stooges are feigning homicidal intent because they’ve finally grown weary of playing second fiddle to “Der Bingle’s” little brother.