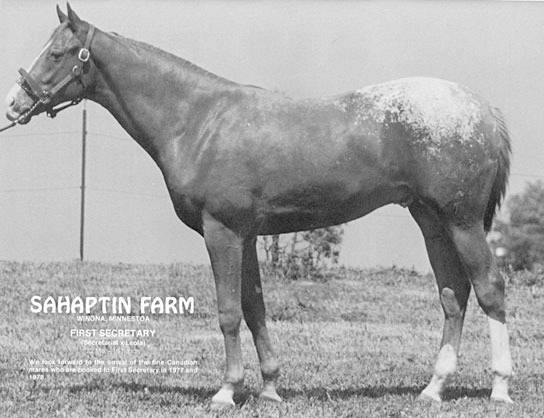 Secretariat didn’t have much luck in the paternity business until a Minnesotan took a chance on him.

1973 Triple Crown champion Secretariat was one of the greatest racehorses of all time, but his performance in the breeding shed didn’t live up to his reputation on the track—at least not at first. His initial failure as a stud inspired all sorts of jokes (President Gerald Ford even got in on the act, cracking that his critics, like Secretariat, were “fast on their feet, but not producing much”) and threatened to reduce his value. But Secretariat’s reproductive struggles weren’t enough to stop Jack Nankivil, a breeder from Winona, Minnesota, from taking a chance on him. Secretariat had recently been bred to a Kentucky Appaloosa named Leola, and Nankivil purchased the pregnant mare in hopes that she would successfully carry her foal to term. He brought her to Winona, and on the night of November 15, 1974, with television news crews from NBC and CBS waiting in a nearby tack room (Nankivil had banned ABC in reaction to sportscaster Howard Cosell’s disparaging remarks about the Minnesota Vikings), Leola gave birth to a chestnut colt with a white blanket and three white stockings. Nankivil named Secretariat’s first foal—surprise—First Secretary.