How to Keep Your Sunny Side Up During the Darkest Times

by Dave Kenney posted on March 29, 2021 in Entertainment, On This Day 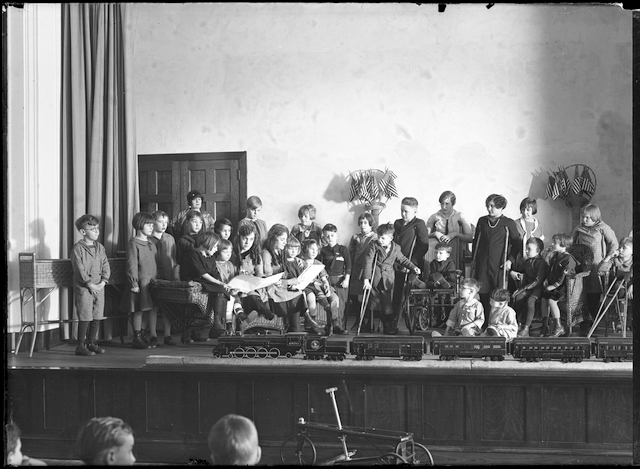 Kids onstage at the Orpheum, a few years before Mike Sanchelli made his debut

Ninety years ago, a few kids from St. Paul’s East Side got up on a downtown stage and brightened the bleakness of the Great Depression.

Every year, during the week leading up to Easter, the RKO Orpheum Theater on Seventh Street near Wabasha in St. Paul invited the kids of the city to come by and show off a little. Dozens of pint-sized performers crammed into the theater’s backstage area dreaming of showbiz glory. They hugged the walls, awestruck. They whispered to each other and stole furtive glances. The Orpheum’s backstage was a strange and wonderful place.  Professional entertainers—“showgirls in skimpy outfits and men all painted up with makeup,” recalled one young performer—smoked cigarettes, drank questionable liquids, and played cards between shows. For some kids, amateur hour at the Orpheum provided a rare glimpse of grown-up decadence. For others, it was a refuge of sorts, a welcome respite from the daily drudgery of the tough times known as the Great Depression.

Mike Sanchelli was fourteen years old when he, his brother, and three friends showed up at the Orpheum on Good Friday evening, 1931. The boys comprised one of three bands invited back for the finals of the annual group harmonica competition. They hadn’t practiced together long. Their group was much smaller than those of the other two finalists. But that didn’t matter much—at least not to the Sanchellis. They were from Swede Hollow, an uncommonly tight-knit community of ramshackle dwellings clustered along Phalen Creek on St. Paul’s east side. Like most of the kids who lived in the hollow, the Sanchellis were getting by as best they could during the early years of the depression. Their father had epilepsy. Their mother had tuberculosis. Neither could work. The boys were the family’s breadwinners, scrounging for odd jobs just to put food on the table. Their dire straits gave them something of an advantage in the harmonica competition: they had nothing to lose.

The Sanchellis and their friends had worked up two songs for the occasion. The first one was a love ballad called, “Should I.” The second tune was an upbeat little number titled “Sunny Side Up.” Like the more popular, “Happy Days Are Here Again,” it served as a kind of optimistic anthem for hard times. The boys didn’t sing the lyrics—they were harmonica players, after all—but many members of the audience already knew the words.

Keep your sunny side up,up!

Hide the side that gets blue.

If you have nine sons in a row.

Keep your funny side up,up!

Let your laughter come through, do!

Stand up on your legs;

Keep your sunny side up.

When the song was over, a judge asked the audience to vote for a winner by applauding separately for each band. When he came to Mike Sanchelli and his harmonica-blowing cohorts, the Orpheum erupted in clapping, cheers, and whistles. “The three kids from Swede Hollow and the two from up on the street were a winning combination,” Mike recalled with pride years later. No one knew whether the decision to play “Sunny Side Up” had anything to do with the victory. But one thing was for sure: it didn’t hurt.

For many Minnesotans who grew up during the Great Depression, the ability to dwell on the sunny side of life, even when conditions seemed darkest, was a talent that made daily existence just a little more bearable. But optimism did not come easily. The depression grabbed hold of Minnesota—and the rest of the country—during the earliest months of the 1930s, and did not let go for nearly a decade. The children who lived through those years never forgot what it was like. The experience shaped their lives. The joys and heartaches of growing up in Minnesota during the 1930s stayed with them over the decades as they fought a world war, built their careers, and raised families of their own.