by Dave Kenney posted on September 16, 2020 in Obituaries, People 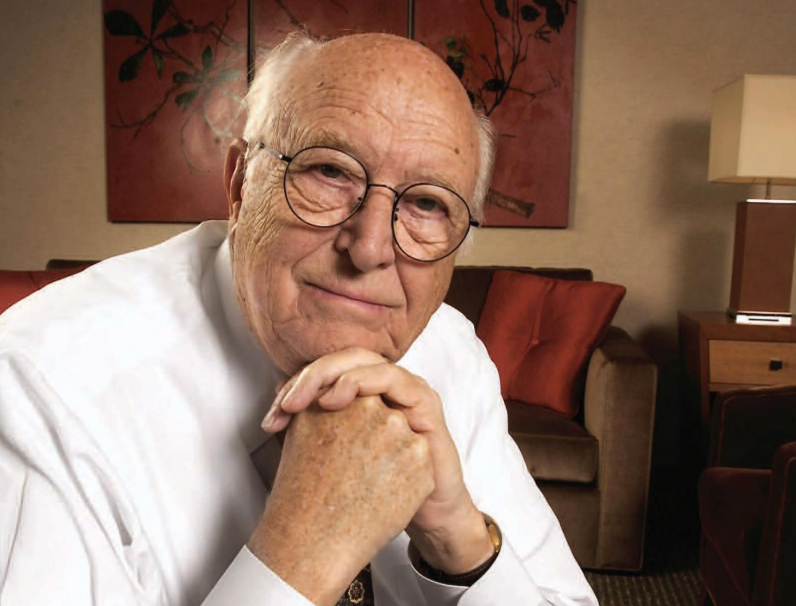 Bill Gates Sr. has died. Seventeen years ago, I profiled him for Equal Justice Magazine. He obviously had his head on straight.

It’s not always easy heading up the largest philanthropic organization the world has ever seen. People tend to think of you first when they need money, and these days, that covers just about anyone—especially anyone who works for a cause. They know you have billions of dollars at your disposal and figure: The worst you can do is say no, right?

William H. Gates Sr. has learned to say no. He has had to. As co-chair of the $24 billion Bill & Melinda Gates Foundation and father of the world’s richest man, Bill Gates Sr. fields a never-ending stream of funding requests from friends, acquaintances, and strangers. Most of the requests address important societal needs, yet not even the Gates Foundation can cure all that ails the world. Priorities, therefore, must be set.

In general, Gates Foundation grants are earmarked to address the foundation’s carefully conceived priorities (global health, education, the digital divide, and projects based in the Pacific Northwest). As a consequence, gates finds himself saying “no” more often than he’d like. It’s a sobering task, he says, especially when the request involves an issue that’s close to his heart: like the law.

Bill Gates Sr. is an attorney and has been for more than half a century. He graduated from the University of Washington School of Law in 1950 and worked his way up through two law firms before heading out on his own in 1964 to become a founding partner of Seattle’s Preston Gates & Ellis. Over the years, Gates has demonstrated an uncommon devotion to the institutions that govern his profession, building a resume that’s a testament to the life’s work of a self-described “typical bar association do-gooder.” Gates has served as President of the Washington State Bar Association, President of the Seattle/King County Bar Association, Chairman of the Commission on Washington State Courts, a member of the American Bar Association’s Standing Committee on the Federal Judiciary, and a trustee at the National Center for State Courts.

While Gates’ devotion to the law spans decades, it is no longer his primary allegiance. Despite spending a long career as a champion of justice, he has been charged with embracing a different agenda as head of his son and daughter-in-law’s foundation. His new priorities are no less important, particularly in the area of global health; the Foundation’s No. 1 goal is curbing the transmission of HIV, which infects 14,000 new people across the globe every day. It also supports the development of vaccines for the 11 million children around the world who die every year of preventable disease, as well as addressing disparities in reproductive health (an African mother stands 200 times the risk of death during pregnancy of her U.S. counterpart). The Foundation also directs significant resources to education initiatives— reducing financial barriers to higher education, creating high schools with smaller classes, and bridging the digital divide by putting computers in libraries.

Do these priorities mean that organizations interested in the administration of justice need to accept the fact that they’ll never crack the coffers of the world’s largest foundation? Gates Sr. admits that he struggles over the right thing to do when legal organizations come to him with well-conceived proposals for help that do not fall within the Gates Foundation’s funding priorities. With a heavy heart this May, for example, Gates dictated a rejection letter to fund a proposal of a national legal organization that he had at one time personally supported. “I’m still feeling a little bad about that one,” he says.

Yet Gates has also shown his ability to say “yes” to worthy legal causes, like civil justice for all, proving you can’t take the lifetime commitment to the law out of the lawyer. In October 2000, the Foundation awarded a $4 million “special projects” grant to Friends of Legal Services Corporation to purchase a new headquarters building for LSC.

“After more than a quarter-century of leasing expensive Washington, D.C., office space, we’re thrilled that we now have a permanent home to match America’s permanent commitment to equal justice,” LSC President John Erlenborn says. “This would not have been possible without the support of the Gates Foundation.”

In Gates Foundation parlance, “special projects” tend to be those that someone in the foundation leadership wants to support, even though the cause doesn’t fall neatly within its funding priorities. In this case, LSC’s champion on the inside was the elder Gates himself.

Gates acknowledges that the LSC grant was a rare exception to the foundation’s strict funding rules. “One of the nice things about having a foundation with a sole trustee is that there’s a degree of flexibility that’s possible to bring to bear on a situation,” he says. “This was an instance of that.” Gates is also quick to point out that the grant would never have been made if he and his son were not strong believers in LSC’s primary mission—to ensure equal access to the nation’s civil justice system. “Obviously [the building grant] arises, in part, from my fairly long interest in this subject,” he says. “And while those interests have not been articulated in the Foundation, when this opportunity came along, it seemed like something that the Foundation should do. It was kind of a special opportunity.”

In retrospect, it’s not surprising that Bill Gates Sr. decided to support a project that didn’t perfectly match the Foundation’s stated priorities. It turns out he has a long-running interest in promoting equal justice. In 1990, during his tenure as chairman of the Washington Bar’s Long Range Planning Committee, Gates led a move to declare “access to justice” the most pressing issue facing the state bar. In its report, the committee warned that the state’s justice system would eventually break down if something wasn’t done to make sure that the legal needs of all Washington residents were met. “I had an opportunity to put it at the top of the pile in terms of what the bar’s objectives ought to be, and I seized it,” remembers Gates.

In the wake of the Gates Committee report, the bar created a special task force to develop solutions to the problem of unequal justice. In 1994, the state supreme court—acting on the task force’s recommendations—established the Access to Justice (ATJ) Board to facilitate the delivery of high-quality legal services to low- and moderate-income people. The ATJ Board now serves as a model for similar state programs nationwide.

Gates’ strong feelings about equal justice also show up in his approach to pro bono work. “It’s a simple question of equity,” he says of attorneys’ responsibility to serve the public. “To whom much is given, much is expected. And much is given to us who have had the opportunity to get a good education, get a law-school education, work in a law firm, make an adequate or better living, and enjoy the fruits of the great education …. You absolutely owe something back to the society that made it possible.” Gates helped instill what he calls an “ethos” of public service at his old firm that is still evident today. Preston Gates & Ellis attorneys handle more than 200 pro bono cases a year. “They’re one of the better pro bono firms in Seattle,” says Patrick McIntyre, executive director of the LSC-funded Northwest Justice Project.

Equal access to justice is a concept that dovetails nicely with Gates’ larger worldview—a philosophy that seeks to bridge the gaps between the poor and the privileged. At the root of Gates’ philosophy is a faith in the power of the public sector and his belief that many Americans have developed an unhealthy disdain for their government.

Even with $24 billion in the till, the Bill & Melinda Gates Foundation can focus its attention on only a handful of the world’s most pressing problems, the CEO says. In a Washington Post piece, Gates once called the U.S. government “the greatest venture capitalist in the history of the world,” hammering home the point with an example that—as father of the founder of Microsoft—he knows quite well. “There’d be no Internet today but for the federal government,” he claims. “Zero. The software industry [was] to a large extent Dependent on things that happened on college campuses, where research by smart people was being supported by the federal government.”

As Gates sees it, many vital missions, including the pursuit of equal justice, must be left for someone else to address—and that someone is often the government. “I think there are among our people some who think of philanthropy as doing so much good stuff that it really is the answer to mankind’s travails,” he says. “That’s a totally unrealistic measurement of the power of philanthropy. The budget of anybody’s city or county or state—and certainly of the United States—when stood alongside all the philanthropy in the world makes philanthropy look like a peanut. And that’s exactly the relative power of philanthropy.”